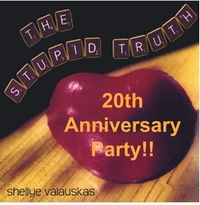 Our first record came out 20 years ago! We haven't played these songs in almost as long. Come here the Stupid Truth start to finish alongside the amazingly talented Brian Larney and his Band!

Haunted by hooks and good old-fashioned songcraft, Brian Larney is an eclectic, non-stop music making machine. The multi-instrumentalist and Connecticut native splits his time performing as a solo acoustic act and as the front-man of the Brian Larney Band. He's an alternative folk-rock singer-songwriter with an honest and thoughtful style that has been described as “quirky, earnest, and vulnerable.” It’s as rooted in the pop music writers of the mid-1960’s as the contemporary artists that he is often compared to.