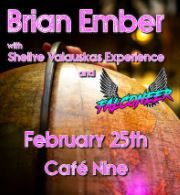 Come celebrate Shellye's birrhday (2 days early) with us at Cafe Nine! Entry to this show requires proof of vaccination by card, photo or a negative test result within 48 hours of show time.

Brian Ember has been slathering New Haven with his soulful baroque pop for the past decade as the singer and songwriter for the string quartet rock band, The Tet Offensive. On the heels of his solo album release (minus a pandemic year), Brian premieres his second video off the album, The New Chastity, and the first time Ember will play with a full band. Come hear tunes off the first album, as well as new songs soon to be released.

Falconeer is an audio/visual project bringing the spectacle back to live music in New Haven, Connecticut. Blending over the top synth pop and retro game influences, Falconeer builds on vintage synthesizers, modified videogame consoles, and a bit of tongue-in-cheek nostalgia for hyperbolic electronic hits of the 80s to make a sound somewhere between Kraftwerk and LCD Soundsystem. As a performance Falconeer uses mechanized sounds, but the human element never leaves the equation. All of the songs have a goal, and the whole production is carried out by one man, live on stage, with arena-sized production values scaled for the modern music venue. The culmination of years of experimentation with electronics and chasing classic sounds, Falconeer began in earnest in 2017 with a collection of animated and constantly moving tracks that conjure dreams of electric sheep.